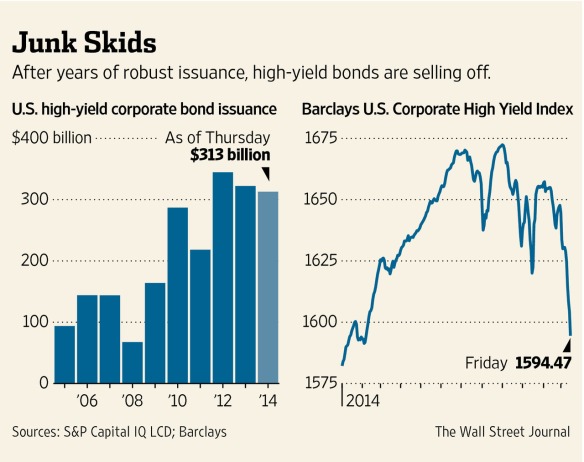 The oil bust is exposing cracks in the $1.3 trillion junk-bond market, putting pressure on a key source of corporate financing and potentially crimping economic growth.

U.S. junk-bond prices have fallen 8% since late June, according to data from Barclays PLC. One-third of that drop has come this month alone, putting the market on track for its worst annual performance since the financial crisis.

While much of the stress has been in the energy sector on the heels of the sharp decline in oil prices, lately the woe is spreading across the junk market.

Each of the 21 high-yield sectors in a U.S. junk-bond index tracked by J.P. Morgan Chase & Co. registered losses in the five days ended Dec. 9.

“Oil prices have crushed the energy sector and it’s leaking elsewhere,” said Andrew Herenstein, co-founder of Monarch Alternative Capital LP, which manages $5 billion and is among the largest investors in distressed debt.

Debt is generally deemed to be distressed when investors view it as at high risk of missing bond payments or of a restructuring, at least at some point.

A pullback from junk bonds is often a harbinger of a broader reassessment of risk across financial markets, raising the possibility that investors could turn more wary of stocks and other assets.

Skeptics warned earlier this year that the junk market was becoming overheated, pointing to the risk of a larger-than-expected retreat.

A raft of postcrisis rules have hit securities-dealing banks, hampering the ability of those middlemen to cushion a selloff, especially in risky assets. Many say the changing role of those dealers is exaggerating the price drops, raising the risk of indiscriminate selling, or “fire sales.”

“The problem with high yield is often that investors have to sell what they can, not what they want to,” said Peter Tchir, managing director at Brean Capital LLC, an investment bank and asset manager.

The junk selloff comes as investors are uneasy about the global economy and Federal Reserve interest-rate increases that many expect to begin next year.

Junk bonds, like stocks, have mostly proved resilient, bouncing back after modest pullbacks. Both these bonds, and stocks, could again resist a deep drop.

But some are betting this current junk-bond decline will deepen, if investors are caught off guard by a slowdown in growth, a corresponding rise in defaults and dealer difficulty in absorbing all the selling.

Joshua Birnbaum, the ex-Goldman Sachs Group Inc. trader who made bets against subprime mortgages during the financial crisis, now has more than $2 billion in wagers against high-yield bonds at his Tilden Park Capital Management LP hedge-fund firm, according to investor documents.

Some investors worry the selling could feed on itself, sending up yields, stalling issuance and prompting restructurings or bankruptcies, analysts said.

Weakening demand for junk bonds has investors demanding a more generous yield to purchase these bonds rather than safer debt. Junk bonds now trade at a yield of 5.28 percentage points above yields of comparable U.S. Treasurys, up from 3.23 points at their June low for the year.

Investors’ “panicky logic” also includes some “nervousness” ahead of a meeting this week when the Fed may provide updated signals on interest rates, said Anthony Valeri, investment strategist at LPL Financial, which directly oversees or advises on $415 billion of assets.

U.S. high-yield bonds have returned just 0.78% this year, including price action and dividends, according to Barclays, putting the debt on track for its worst showing since 2008. Junk bonds returned 7.44% last year and 15.8% in 2012, Barclays said.

Since June, investors have yanked more than $22 billion from funds dedicated to junk bonds, according to fund tracker Lipper. Investors withdrew an additional $1.9 billion in the latest week ended Wednesday.

To be sure, the factors that have supported the junk-market rally since 2009 remain largely in place. The U.S. economy is growing, with job creation expanding last month at the fastest clip since the tech boom of the late 1990s, and interest rates and defaults remain low. Despite the issuance slowdown, financing remains broadly available and defaults are low.

“These bonds have been beaten up tremendously and they’re not all going to default,” said Brendan Dillon, senior investment manager at Aberdeen Asset Management Inc. Mr. Dillon said he has added 1% to 2% to the firm’s energy exposure within its high-yield funds because those bonds were oversold. Still, traders are scurrying to reposition.

Daily high-yield trading volumes earlier this month reached an average of $8.2 billion, said J.P. Morgan, just shy of their October record and up from the daily average of $5.6 billion in 2013.

Still, some see a buying opportunity at hand. Investors will “try to sell all or a lot of their energy holdings somewhat indiscriminately…and when the dust settles some investors have an opportunity,” said David Breazzano, chief investment officer at money manager DDJ Capital Management LLC, which oversees about $8 billion.

—Matt Wirz contributed to this article.

Write to Katy Burne at katy.burne@wsj.com, Gregory Zuckerman at gregory.zuckerman@wsj.com and Rob Copeland at rob.copeland@wsj.com